Welcome, to Fuco (Source), a coloring game! Fuco was made in 48 hours as part of the Ludum Dare game compo. The theme was Connected Worlds, which game me the inspiration for Fuco. Originally I had an idea for a game that mixed game art styles (pixel art + isometric + full 3D), however that was far too ambitious considering the time constraints and my artistic skills.

This was my second Ludum Dare, my first game being Nent which took advantage of WebGL shaders for a metaballs effect. Since I joined Clay.io I figured that this time I would make a game that could be played on mobile, which meant no WebGL (due to iOS support). Because I wrote platform-agnostic code, I was easily able to publish the game to many platforms using Cordova

Being my second time participating I should have had better time management. However I made most of the game on Sunday (pulling an all-nighter, being awake during the earthquake at 3am):

When you play the game, you'll notice that coloring the correct area below will erase the color above, and an incorrect coloration will override the above color (incorrectly). Solving this problem in a performant way on HTML5 Canvas was not immediately obvious. If I had been able to use WebGL, I could easily write a shader which could do calculations based on each pixel value. However canvas is too slow to update each pixel each frame which meant my solution had to be based on native canvas calls.

Each section of the circle is defined by a closed shape, so I simply erase the region the player is brushing using ctx.clip() which allows me to mask draw calls. Here is my solution: 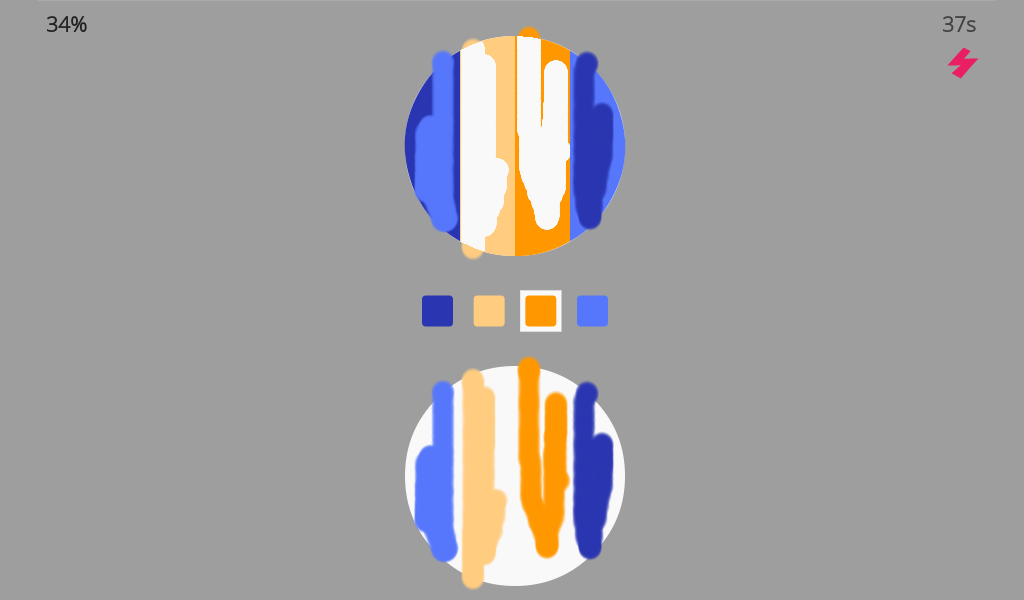 One of my favorite effects I made for this game was the home screen animation of the logo. Some googling for SVG animation landed me at this example, which I adapted slightly for my purposes. I used Inkscape to draw the SVG paths, and them inlined the SVG into the HTML.