Promiz.js is a promises/A+ compliant library (mostly), which aims to have both a small footprint and have great performance (< 1Kb (625 bytes minified + gzip)). I wont go over why javascript promises are amazing. Instead, I'm going to focus on what goes on behind the scenes and what it takes to create a promise library. But first, some benchmarks (see bench.js for source - server side): 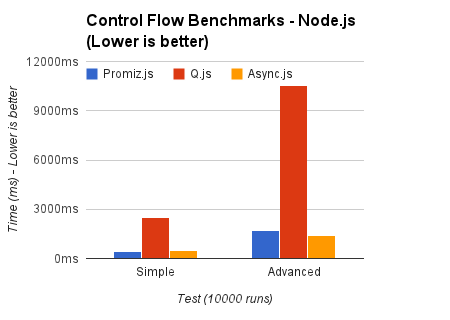 Benchmarks are obviously just that 'benchmarks', and do not necessarily test real-world application usage. However, I feel that they are still quite important for a control flow library, which is why Promiz.js has been optimized for performance. There is however, one thing I should mention: Promiz.js will attempt to execute synchronously if possible. This technically breaks spec, however it allows us to get Async.js levels of performance (note: Async.js is not a promise library and doesn't look as clean).

Alright, lets look at the API that our library has to provide. Here is a basic common use case:

Now, while the usage is simple, the backend can get a little bit complicated and requires a good bit of javascript knowledge. Lets start with the most minimal possible setup.

First we're going to need a generator, that creates the deferred (promise) objects:

Now, lets define our promise object. Remember, to be spec compatible, it must have a .then() method, and have a state. In order to be able to chain these calls, we're also going to need to keep track of what we need to call later. This will constitute our stack (functions that need to be resolved eventually).

The .then() simply adds the functions it was called with (a success callback and an optional error callback) to the stack, and then checks to see if it should consume the stack. Note that we return this which is a reference to our deferred object. This lets us call .then() again, and add to the same deferred stack. Notice, our promise needs to come out of its pending state before we can start consuming the stack. Lets add two methods to our deferred object:

Alright, so this resolve actually does two things. It checks to see if we've already been resolved (by checking our pending state) which is important to be spec compliant, and it fires off our resolved value to start consuming the stack. At this point, were almost done (!). We just need a function that actually consumes our current promise stack (the this.fire() - the most complicated function).