The LED lamp behind my monitor pulsates with the audio from my computer. Video is at the bottom. The Code (warning, ugly code ahead)

So the way the led lamp works, is that it is hooked up to an arduino which connects over USB to my tower. My computer is running a python script which sends the arduino the value of brightness to set the lamp at, based on the audio output of the music.

Getting the audio output into python:

This was probably the most silly issue that I had to deal with, because it seemed so simple in terms of what I needed to do, but took a ton of trial and error and lots of failing. Let me save you the trouble. You may have heard of JACK. JACK is a pain, takes a lot of work, and for me it didn't work at all. Save yourself the trouble and stay away from JACK. I use PulseAudio for my sound system as it works  with my USB headphones (they're virtual 7.1 surround sound and have drivers that only work on windows XP). Setting up my headphones is a pain, but worth it because of the fuzz (the part that goes over my ears is fuzzy which makes them extremely comfortable). Ok, enough background, here is the secret:

You can check out the code here. Basically it uses the pyaudio library to record audio, write streaming data chunks to a temporary wav file (this could be improved upon), and use some magic to get amplitude data from the wav file. Then it normalizes the amplitude over the 0-255 range of LED brightness for the arduino, smooths the curve slightly, and sends the amplitude over to the arduino at 115200 baud (not sure if this is too much/not enough, but it worked for me - 9600 baud hung because it was too slow).

My normalization algorithm for the value consists of storing the last 100 values of data and dividing new data by the max of the last X values (all values before a reset) to get a value between 0 and 1, which I then multiply by 255 to get 0-255. After a period of low values (ie. silence), detected by the store of last 100 values, the minimum and maximum values reset to allow for a new song which may not fit the amplitude of the previous song. I smooth the data by averaging the current point with the previous point.

So the arduino UNO that I have has 6 pwm digital I/O pins, which allows me to dim LEDs attached to those pins. After that, just running an analogWrite() on them with a value between 0-255 will dim the LED accordingly. One thing I did have trouble with though was sending the 0-255 number over serial from python, which I fixed by using a buffer and made the python always write out 3 character strings of data and used the atoi() command (ascii to int) to get the values back out.

I hooked up 12 LEDs, 6 pairs of 2 LEDs hooked up in parallel connected to one of six pwm I/O pins. After lots of frustration regarding the illumination of the LEDs (I used a dremel to diffuse the LEDs, and ended up arcing them as shown below), I finally got it to work. I just can't let the arduino fall off because the wires going to it come out easily (design issue, but hey it works). 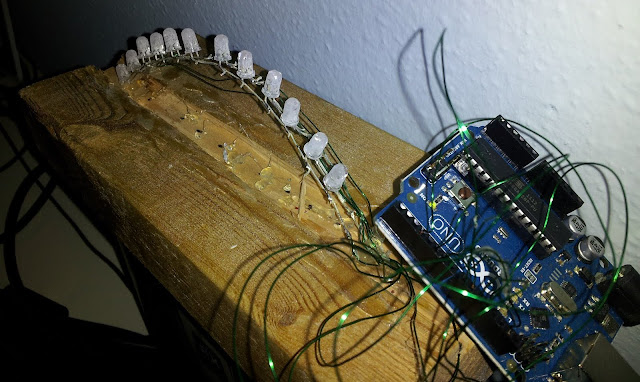